Looking forward to hosting you at 10th International Congress of the Turkish Society of Toxicology in Antalya in 2019!

Antalya has many well preserved historical sites and ancient settlements dating back thousands of years. These historical structures give you a number of options for daily activities. There is history, natural beauty and a rich variety of local life style to be discovered. Somewhere beyond your dreams. Antalya, feel the breath of Mediterranean. 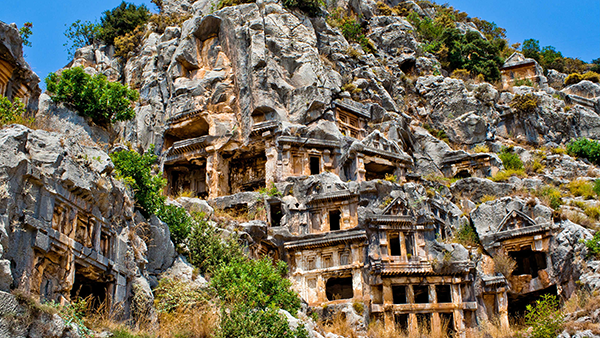 Antalya is a typical Mediterranean city, which combines ancient cities whispering tales of history, myth and legend, emerald green forests and the sparkling waters of the Mediterranean. Antalya is the largest city on Turkey’s Mediterranean coastline. This great city is full of places to go and world famous seaside towns to stay for tourists.

The area has sunny weather for 10 months a year, in summer the average temperature is between 28-36 degrees. In January the average temperature varies between 10-20 degrees. Snow doesn’t fall in Antalya center except for the high mountains which surrounds Antalya. It is very rare for the temperature to drop below zero. During the last 40 years the highest recorded temperature was 44.6 °C. In Antalya the average humidty rate is 64%, whereas the seat temperatures are 17.6 °C in January, 18.0 °C in April, 27.7 °C in August and 24.5 °C in September.

Antalya offers plenty of things to do for everyone. If you want to dose up on sightseeing, you’ll find a fascinating line-up of attractions to keep you busy. The labyrinthine old town is full of atmospheric historic sites, while the city is perfectly placed to act as your base for sightseeing around the outlying area, where dozens of grand ruins await. It’s not all history, though. This city is also a great spot for your launch onto the white-sand beaches of Turkey’s Turquoise Coast. Beach lovers and history buffs will both leave satisfied. 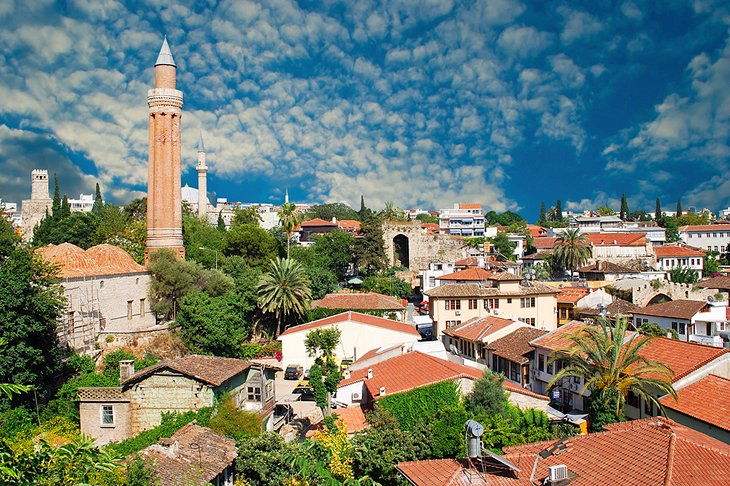 The maze-like Kaleiçi neighborhood was made for strolling. Perfectly restored whitewashed and red-roofed Ottoman mansions line the cobblestone streets, now home to a plethora of boutique hotels, souvenir shops, art galleries, and restaurants. Although it’s more a place to simply breathe in the old-world ambience, there are also plenty of small tourist attractions for those who want to sightsee. The main square (Kale Kapısı) has a fortress gate and stone-clad clock tower, while the 18th-century Tekeli Mehmet Paşa Mosque is worth a look just for its stunning interior tile work. Along Hesapçı Sokak, you’ll find the graceful Kesik Minare (truncated minaret). Destroyed by fire in the 19th century, this is all that is left of a building that started its life as a Roman temple, was converted into a Byzantine church, and finally became a mosque. 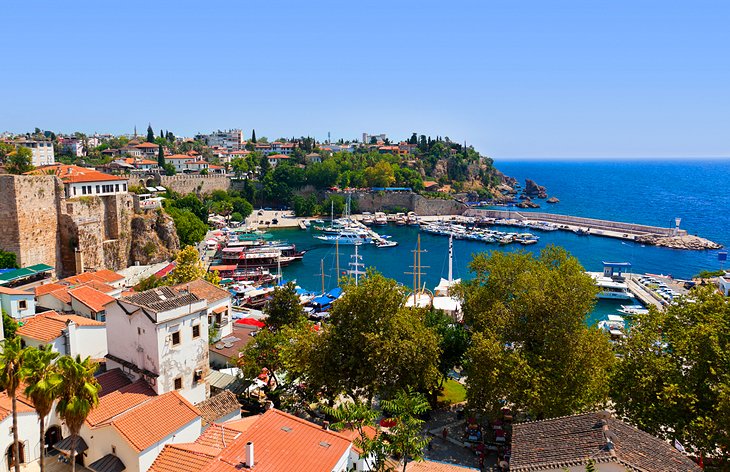 Nestled into a recess in the cliffs, Antalya’s old harbor is a picturesque huddle of boutiques, pretty cafés, bazaars, and gently bobbing yachts that look out over the shimmering Mediterranean. With its peaceful pleasure-boat atmosphere now, it’s difficult to imagine this place was once Antalya’s major economic hub, but from the 2nd century up until the mid-20th century, this was the main port, bringing trade and prosperity to the city and surrounding region. These days you come here to shop and then watch the sun set over the sea while you sip a coffee, or you can head out onto the Mediterranean on one of the many excursion boats to swim, sightsee, and spread out your towel on an empty beach. 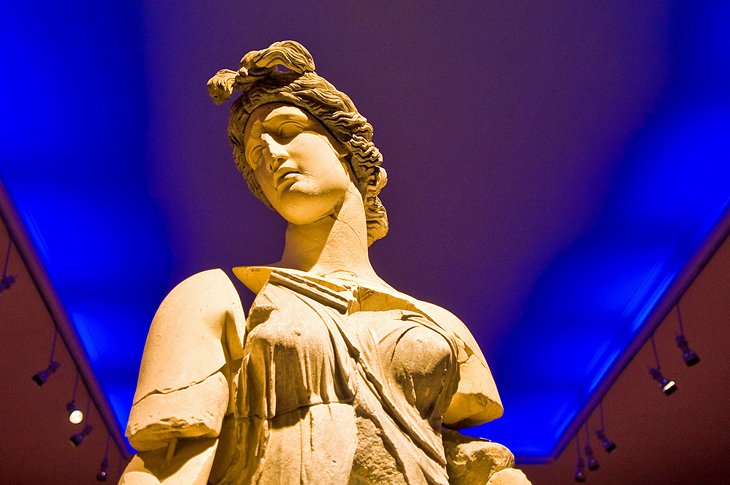 If you’re at all interested in Turkish history don’t miss this excellent museum. The dazzling exhibits here showcase all the best finds from excavation sites across the Turkish coast. Even better, the collection is displayed in exemplary fashion, making Turkey’s rich (and rather complicated) history easy to understand. The large archaeological section offers displays from the Bronze Age to Byzantium, with a particular emphasis on ruins in the nearby area. If you’re short on time make a beeline for the galleries containing the mosaics from Seleukeia, silver hoard display from Aspendos, and divinity statues from Perge. 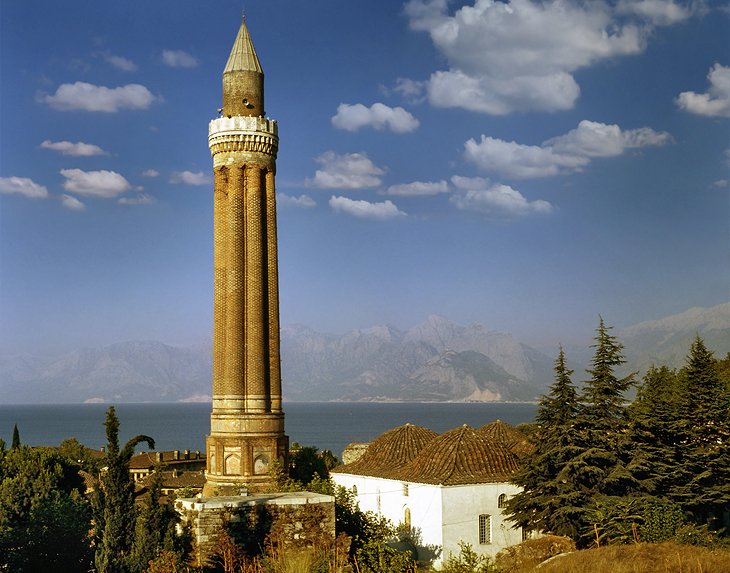 Antalya’s most distinctive landmark is the Yivli Minare (fluted minaret) built by the Seljuk sultan Alaeddin Keykubad (1219-36). The minaret is a typical example of Seljuk architecture, with a square base surmounted by an octagonal drum bearing the fluted shaft, with its corbelled gallery around the top. The attached 14th-century mosque is still in use today. The minaret is right beside the Kale entrance gate into the old city. Opposite the minaret is Antalya’s Ottoman era clock tower, while nearby are some tombs dating from the 14th century. 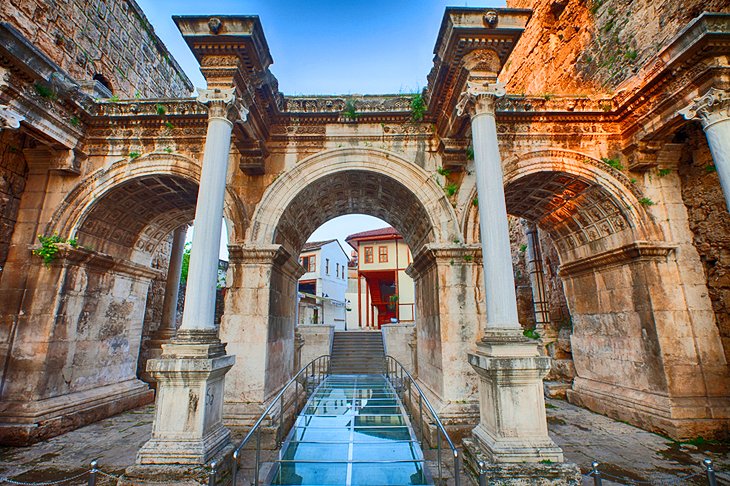 Hadrian’s Gate is one of the main (and the most dramatic) entrance gates into the Kaleiçi district. Considerable stretches of the Hellenistic and Roman town walls on the eastern side of the old town have been preserved, and Hadrian’s Gate is the most notable of these sections. Erected in honor of the AD 130 visit by Emperor Hadrian himself, this imposing three-arched marble gateway, flanked by imposing towers, is decorated with rich sculptural decorations. As you walk through the arches look up at the ceiling to view the best preserved carvings. 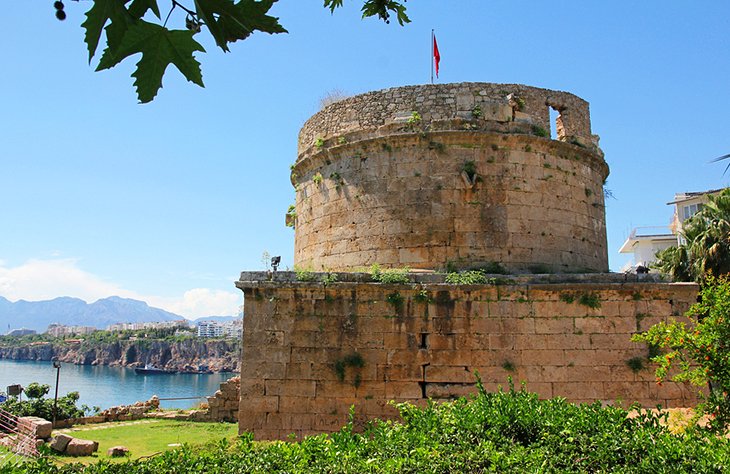 Built in the 2nd century, this squat 14-meter-high cylindrical tower watches over the old harbor from high above on the edge of Karaalioǧlu Park. No one is quite sure what its main function was, but most agree it acted as a watchtower or lighthouse over the busy port below. Now it’s a fantastic spot to watch the sunset or get that all-important panoramic view over the old harbor area. The park itself is prime picnicking territory and a tranquil, flower-filled spot to escape the city streets. Do as the locals do and come here at dusk to promenade. Excellent cafés are also nearby if you need to recuperate after sightseeing. 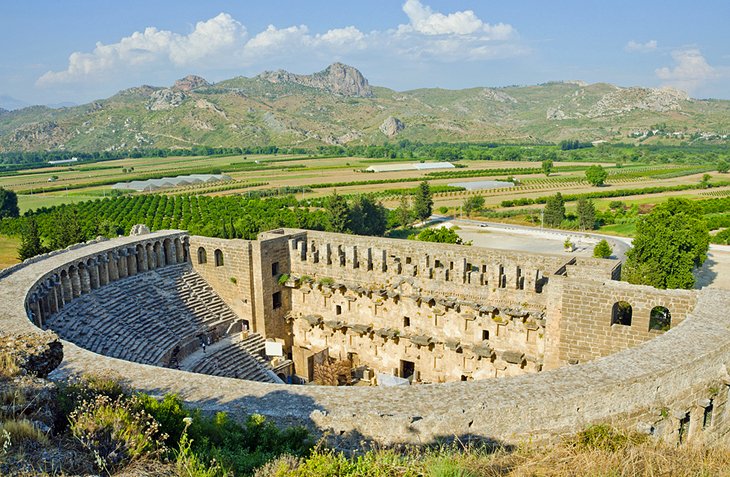 The main reason history-buffs visit Antalya is to make the day trip to Aspendos. This archaeological site is home to a Roman theater commonly thought to be the best preserved in the world and one of the top tourist attractions in Turkey. The glory days of this dazzling, ancient town were during the 2nd and 3rd centuries, when most of the ruins that can be seen today were built. Apart from the theater, which has been fully restored and can seat 15,000 people, much of the rest of the site still lies in ruins and is probably only interesting to the most enthusiastic sightseer. 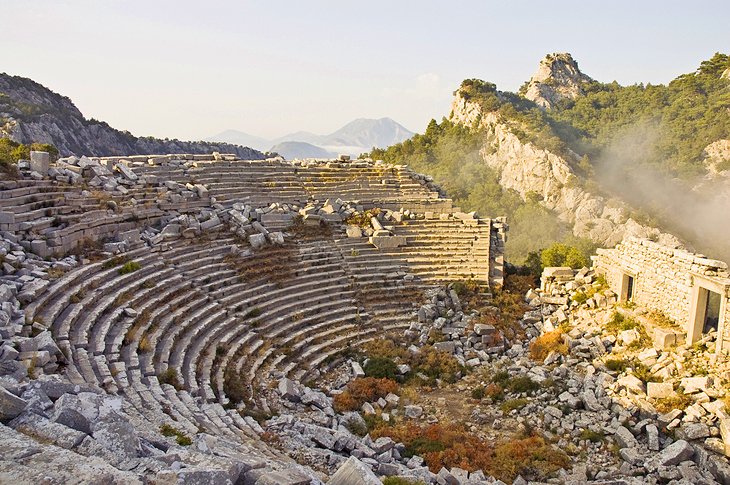 Aspendos may get all the tourism fame, but Termessos beats it hands down for atmosphere. Neither the Greeks nor the Romans managed to tame the war-like Pisidians, who fiercely protected their independence from the mountain eyrie of Termessos. The well-preserved remains of this ancient city lie scattered along a rugged hillside with jaw-dropping views across the surrounding countryside. Wear sturdy shoes and take plenty of water if you want to fully explore this site. The colonnaded street and upper agora are particularly impressive but don’t miss the theater, where the vistas across the peaks of the Taurus Mountains are surreally beautiful. 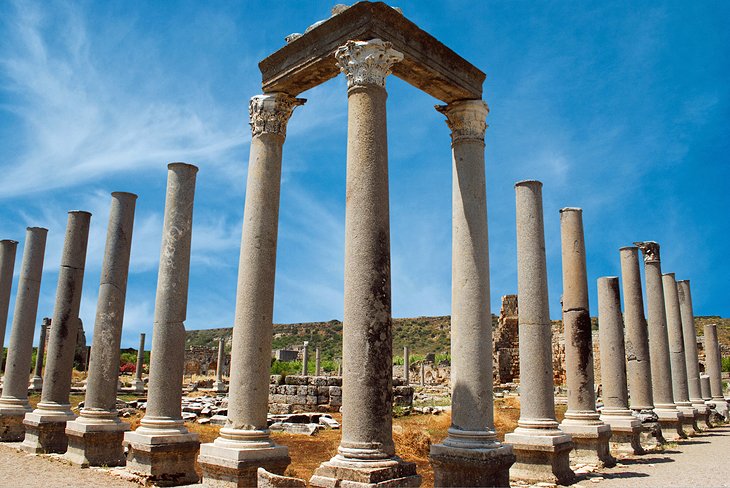 Perge’s vast and rubble-filled stadium, half-destroyed temples, and huge colonnaded agora are imbued with an atmosphere of past glory. This was once the capital of ancient Pamphylia, which blossomed under first Greek and then Roman rule. The ruins here are not as well-preserved as others on Turkey’s Turquoise Coast, but this also means they attract fewer crowds, leaving visitors able to explore the long colonnaded streets and half-collapsed temples in peace. The Roman baths, Hellenistic Gate, and Acropolis are all particularly interesting. 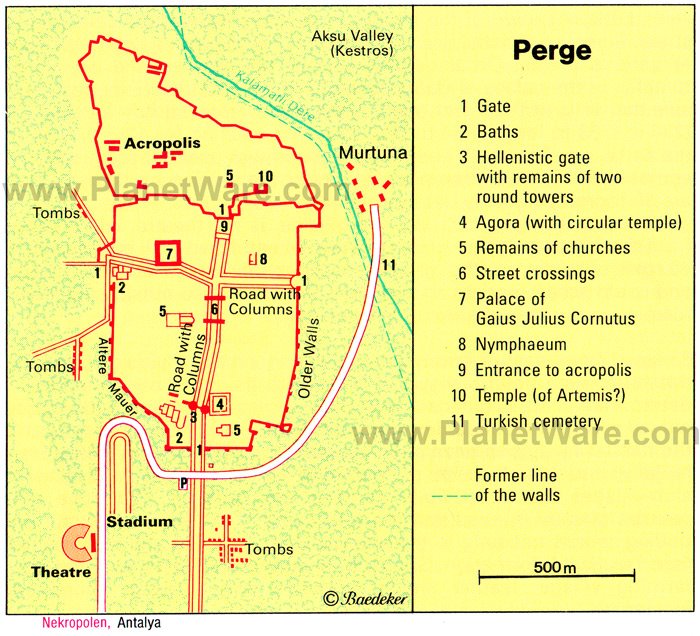 10 Olympus and the Chimaera 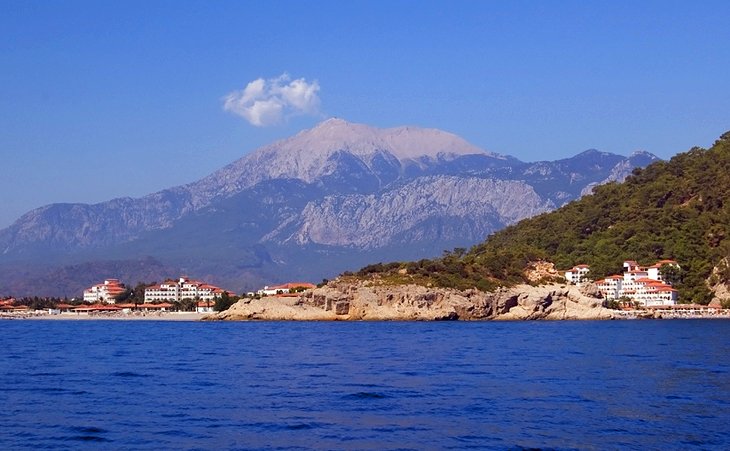 The near-twin villages of Olympus and Çıralı sit on a piece of lovely coastline near the overgrown ruins of the ancient Lycian city of Olympus. As well as the ruins, the famed attraction here is the chimaera, a naturally occurring eternal flame that flickers out of the rock cliff above. Olympus is popular with young backpackers and has a reputation for being lively at night, while Çıralı is more laidback and all about chilling out on the beach. Both are perfect for anyone seeking a beach holiday well away from Turkey’s purposely built-up tourist resorts. 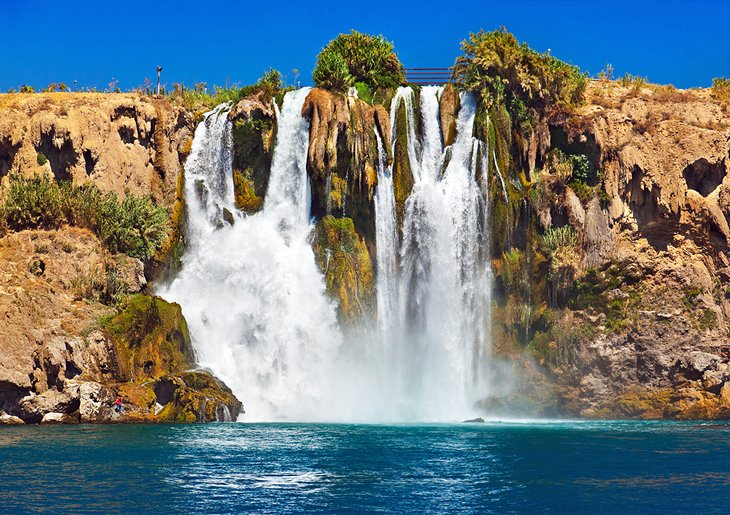 The limestone countryside around Antalya is rich in karst springs, sinkholes, and waterfalls. The lime deposits from these springs have built up over a period of 1.5 to two million years into vast travertine terraces similar to the famed terraces at Pamukkale. Kirkgöz and Pınarbası (just to the northwest of Antalya) have springs and sinkholes to see, while at Düdenbası, a cascade of waterfalls tumbles down a narrow gorge. There are both upper falls (Düdenbası Selalesi) and lower falls (Düden Çayı) to admire, and a trip here makes a nice nature break from Antalya’s glut of historic attractions. The Karain Cave, near Dösemaltı, was inhabited by prehistoric man and has yielded finds from both the Lower and Middle Palaeolithic eras. Excavated finds here include bones and teeth belonging to Neolithic man. Some of the finds are on show in the small but remarkably comprehensive museum on site. The wide, arching caverns here are a good opportunity for some easy caving and are very popular with local families having a break from the city. If you can, try to come on a weekday when they’re less busy. If you have a hire car, the cave and museum combined with the karst springs a little further north make a good day trip. 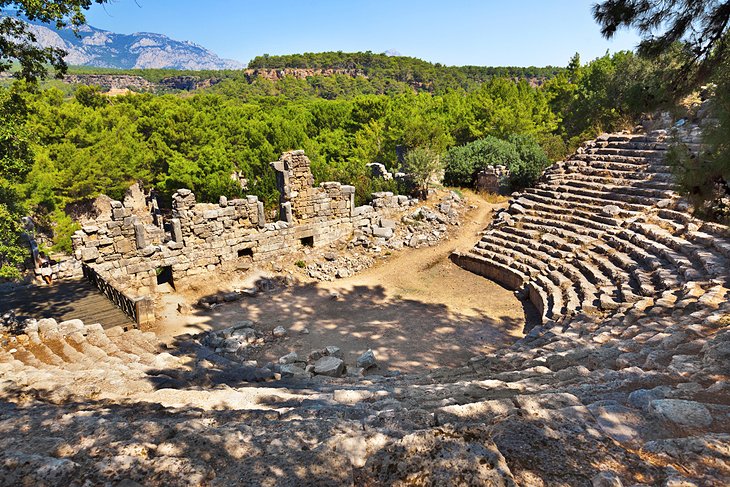 The old Lycian port of Phaselis is where Alexander the Great set up his winter quarters in 334 BC. There are remains of a theater, aqueduct, temples, a colonnaded street, and a Hadrian’s Arch Gate erected in AD 114. The seaside location of the ruins is very pretty. A museum on site displays excavated finds. If you have time, a couple of kilometers before Phaselis is the Olympos Teleferik (cable car), which journeys up the side of Tahtali Mountain to the summit at 2,275 meters for panoramic vistas over the coast.

The Kocain Mağarası lies hidden deep within the karst mountains of the region. The 600-meter-long cave was first investigated by K. Kökten, whose finds here prove that it was inhabited in prehistoric times. At the entrance is a huge Roman cistern and also traces of a very early settlement. The cavern here is colossal and boasts some mammoth stalagmites, which have formed into weird and wacky shapes. Bring along a torch and wear sturdy shoes if you want to explore the cave’s interior as it can get slippery underfoot.